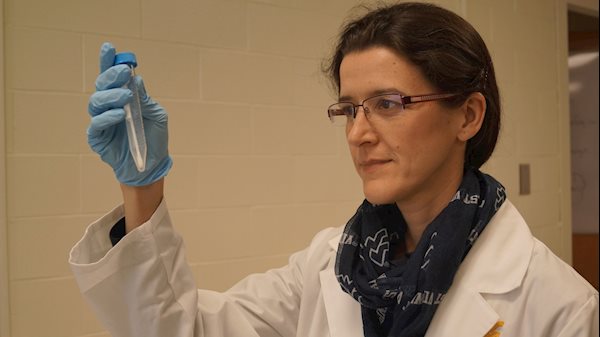 MORGANTOWN, W.Va. – Up to 20 percent of people with opioid use disorder may not respond to standard treatment. A new study at West Virginia University seeks to understand why.

According to data compiled by The New York Times in a report earlier this month, the opioid epidemic in America has reached a critical level with last year seeing the largest ever annual jump in drug overdose deaths. West Virginia has been hit especially hard by this problem, leading the nation in drug overdose death rates.

The fixed-dose combination of buprenorphine/naloxone is one of only two major pharmacological interventions approved by the U.S. Food and Drug Administration to treat opioid dependence. This treatment helps those suffering with opioid dependence by activating opioid receptors in the brain.

“Sadly, not all patients struggling with opioid dependence who seek help respond to treatment,” said Marina Galvez Peralta, Ph.D., PharmD, principal investigator of the study and assistant professor in the School of Pharmacy. “We need to identify why some patients are not responding to buprenorphine/naloxone treatment so we can better target this population and provide recommendations to improve treatment efficacy and therapeutic success.”

It’s a life-or-death question for many patients.

There are many factors that are involved in treatment response, but so far there are only preliminary studies trying to address individual response to buprenorphine/naloxone.

“Although there are environmental and social factors that affect how patients respond to buprenorphine/naloxone and their ability to win their personal fights against addiction, we are seeking to identify genetic variations that could affect how buprenorphine works in the brain or is metabolized,” said Galvez Peralta. “By comparing genetic variants with metabolomics of buprenorphine we can identify patients at risk of failure, and potential new targets for treatment. This way, we could provide better and more personalized care to these patients and really fight back against the opioid crisis in our state.”

The new study will be looking to identify these genetic variants, as well as buprenorphine and major metabolite norbuprenorphine levels in urine among patients enrolled in WVU Medicine’s Comprehensive Opioid Addiction Treatment, or COAT, program.

The program is an innovative group-based extended treatment approach that serves as a model for addiction treatment throughout the state. If the study is successful, the roughly 575 monthly patients who rely on the program for treatment will have an increased chance of beating their opioid dependence.

“Using buprenorphine products to manage opioid addiction has been an absolute game changer in the field of addiction treatment,” said James Berry, D.O., addiction psychiatrist and medical director at WVU Medicine’s Chestnut Ridge Center. “Prior to their availability, the vast majority of patients with heroin or pain pill addiction were only given the option of detoxification, which has proven to be woefully unsuccessful.”

“This treatment is a dramatic improvement from the over 90 percent drop out rates of detoxification, but, still unacceptable as many of these patients will go on to relapse and possibly die,” said Berry.

Along with Galvez Peralta and Berry, this study leverages the work and expertise of Mark Sarlo, M.S., Vincent Setola, Ph.D., Carl “Rolly” Sullivan, M.D., Laura Lander, MSW, LICSW, the physicians and therapists at the COAT program, Stephan Brooks, MPH, and several PharmD students. The genetic analyses will be performed at the WVU Laboratory of Neurobiology and Genetics of Substance Abuse directed by Setola.

The study is being funded by WVU’s Substance Abuse Task Force and the West Virginia Clinical and Translational Science Institute. WVU has prioritized research addressing addiction in response to the state’s ongoing crisis.

WVCTSI is funded by an IDeA Clinical and Translational grant from the National Institute of General Medical Sciences (2U54GM104942-02) to support the mission of building clinical and translational research infrastructure and capacity to impact health disparities in West Virginia.